The UKBMS provides a wealth of information on the trends and status of butterflies across the UK. We provide annual, 10-year and long-term (series) trends for 56 species which can be found in the species accounts and the summary tables (UK or Country level).

Trend analyses are also performed for groups of butterflies and these are used as biodiversity indicators. These trend analyses tell us which species are increasing or declining across the UK, and help inform conservation by identifying priority species and their responses to management over time (The State of the UK’s Butterflies 2011).

The UK and country trend indices and the indicators are classified as ‘Official Statistics’ and are produced to the high professional standards set out in the Code of Practice for Official Statistics, which sets out eight principles including meeting user needs, impartiality and objectivity, integrity, sound methods and assured quality, frankness and accessibility. More information on the Official Statistics Code of Practice can be found at http://www.statisticsauthority.gov.uk/assessment/code-of-practice/index.html

In addition, the UKBMS data is widely used in research. Below are some of the recent highlights (since 2010) and a more extensive list of publications using data from the scheme is available here:

Butterflies are a model taxon for studying the effects of environmental change, as demonstrated by large body of research results. Below are some of the recent highlights (since 2010) and a more extensive list of publications using data from the scheme is available here:

This page describes the Butterfly Monitoring Scheme methodology.It has been split into several section, to make it easier to read.

Clicking on one of the section titles below will display the details for that area of the methodology.

Warming temperatures have been shown to have both positive and negative effects on populations of British butterflies. Species at the northern limit of their ranges have been able to expand their ranges, moving northwards throughout the UK. Species such as Orange-tip and Peacock have become common in Scotland as the climate has become suitable. Silver-spotted Skipper has been able to colonise new habitats on north facing slopes, having previously been mainly restricted to south facing slopes. Similarly, temperature rises have also been associated with increases in Adonis Blue populations. Recent research has also shown that warming temperatures have facilitated the spread of the Brown Argus throughout England through increased use of host plants it previously only rarely used.

Migrant species have also increased in number in response to recent warming. Red Admiral, in particular, and Clouded Yellow to a lesser extent, now regularly over-winter in the UK to produce resident populations due to increasingly favourable conditions.

The story is likely to be the reverse for those species at their southern range limit in the UK with evidence to suggest that their ranges are contracting at the southern edge and/or at lower elevations, a result echoed in studies elsewhere in Europe. Population responses of these species are mixed, however, as numbers of Scotch Argus and Large Heath have both increased on monitored sites, whilst Northern Brown Argus has declined.

In addition, most species have started to appear progressively earlier in the year, and this has been strongly linked with increased temperatures. A number of species are now able to produce more than one brood in warm years, and this is increasingly observed at monitored sites. For example, Wood White now regularly produces a second brood at most sites where it is monitored, whereas at the start of monitoring this was a much rarer occurrence. Meta-analyses have shown that butterflies and other primary consumers may be advancing at different rates to both their hosts and their predators leading to concerns over potential temporal mismatching in trophic interactions.

Recent rapid range expansion in the Brown Argus is associated with increased use of geranium species as host plants brought about by climatic suitability with recent warming: Pateman et al. (2012) in Science (doi: 10.1126/science.1216980)

Community composition changes are rapid but different between birds and butterflies. Both groups do not keep up with temperature increases and suggest a climatic debt at national and continental scales. Devictor et al. (2012) in Nature Climate Change (doi:10.1038/nclimate1347)

Differences in the rate of advance of biological events between plants and consumers suggests potential for temporal mis-matching in key trophic interactions. Meta-analyses have shown that many biological events across multiple taxa and ecosystems are occurring earlier in the year consistent with recent climate warming. However, the rate of these advances are not equal across different trophic levels, being greatest in plants and least in secondary consumers Thackeray et al. (2010) in Global Change Biology (doi: 10.1111/j.1365-2486.2010.02165.x)

Habitat loss and changes in habitat management have been the greatest drivers of change in UK butterfly populations. Numerous studies on butterfly ecology have helped conservationists to restore suitable habitat, and subsequent monitoring through the UKBMS has enabled us to determine how successful this has been. In recent years some of our most threatened species, including the Pearl-bordered Fritillary and Heath Fritillary have started to show recovery across sites where habitat conservation has been put in place. The Large Blue has been successfully re-introduced into England and has now spread naturally into other suitable areas, whilst populations on monitored sites have significantly increased. However, many species are still strongly affected by management of habitats; biodiversity indicators using UKBMS data show that both woodland and farmland butterflies are declining.

Colonisation of newly restored habitats has been shown to take several years, and is related to a species’ mobility and diet, with less mobile species and those with localised host plants taking longest. Models have shown the potential importance of –landscape- versus site-scale conservation. Habitat heterogeneity has been show to be important for enhancing and stabilising butterfly populations. The habitat connecting butterfly populations affects species’ ability to disperse to new sites and their ability to recovery after population crashes (e.g. caused by extreme events such as drought).

Many species have shown significant declines despite the predicted positive effects of climate warming. Those that have increased have generally done so because conservation management has been put in place, for example the Adonis Blue and Silver-spotted Skipper where grazing is essential. Research has also shown that contrary to the expectation that more habitats will be used by butterflies as they move northwards with climate warming, many species’ habitat associations have reduced over time. The likely cause of this is the deleterious effects of habitat degradation.

In addition to direct habitat loss there are other factors which may be contributing to butterfly declines. Future and ongoing research into the effects of pesticides, for example, is a new area of research for which monitoring data is likely to help determine to what extent butterflies are affected by farmland chemicals.

In warmer years butterflies use a greater range of habitats, yet habitat breadth has decreased over time for most species. Habitat degradation continues to be a major driver of reductions in habitat breadth and population density of butterflies. Oliver et al. (2012) in Global Change Biology (doi:10.1111/j.1365-2486.2012.02737.x)

Host plant and mobility affect speed of colonisation by butterflies on restored grasslands. There is a time lag between arable reversion and colonisation which should be accounted for when assessing restored grassland habitats. Low mobility species and those with localised host-plants take the longest to colonise. Woodcock et al. (2012) in Biological Conservation (doi: 10.1016/j.biocon.2012.05.013)

Butterfly populations benefit from having a mixture of habitats available. Populations of butterflies are more stable, and thus more likely to persist, in heterogeneous landscapes: Oliver et al. (2010) in Ecology Letters (doi: 10.1111/j.1461-0248.2010.01441.x)

In conjunction with the Butterflies for the New Millennium project, the UKBMS shown that many species of UK butterfly have declined in both range and abundance. It isn’t all bad news, there are a number of species that have been expanding their ranges and/or showing increases in abundance. Regular updates in species status are being used to redefine the species which are future priorities for conservation action, including those Red Listed and threatened with extinction. The recent State of the UK’s Butterflies report has shown that the rate of decline in some of our rarer species has slowed down or even reversed in response to targeted conservation management, especially through agri-environment schemes.

Further to this is a body of research attempting to determine some of the mechanisms behind different population trends. For the High Brown Fritillary an allele effect is apparent with low growth rates at low pop densities, and immigration key in colony survival and species persistence.

There has been inconclusive evidence suggesting that a recently arrived parasitoid is responsible for the declines seen in Small Tortoiseshell across the UK, whilst earlier studies on the same species have shown that drought is also likely to play a role. After years of speculation about the life cycle and migration behaviour of the Painted Lady, a study ranging from northern Africa throughout Europe, has shown that they return to northern Africa in the autumn after a series of generations during which they make progressive northward, then southward movements through Europe.

Butterfly declines continue despite European Union targets to halt biodiversity loss. Both the range and abundance of many species have continued to decline across the UK from 2000-2010, but there are encouraging signs that some of our most threatened species are responding positively to conservation management. Fox et al (2011) in The State of the UK’s Butterflies 2011.

An allele effect is evident in three quarters of High Brown Fritillary local populations, highlighting the need to increase resource availability in both occupied and unoccupied sites. Bonsall et al. (in press) in Ecological Applications (http://dx.doi.org/10.1890/13-0155.1)

Secrets of the Painted Lady’s journey from Africa and back revealed for first time. Using transect data along with radar technology and citizen science data, the hypothesised return journey of the Painted Lady is finally understood. Stefanescu et al (2013) in Ecography (doi: 10.1111/j.1600-0587.2012.07738.x)

A recent arrival of a parasitic fly to the UK is adding to the declines of the Small Tortoiseshell butterfly. Survival is lower in Small Tortoiseshell larvae where the parasitoid is present suggesting a role in the recent declines of this widespread butterfly. Gripenberg et al. (2011) in Ecological Entomology (doi: 10.1111/j.1365-2311.2011.01269.x)

The UKBMS is constantly evolving. The Wider Countryside Butterfly Survey is now a fully operational scheme, online recording is in place and new statistical techniques have been tried and tested to make use of more of the data collected and produce more accurate species indices.

The UKBMS is regarded as a gold standard with similar methods widely adopted across Europe. A recently published manual is helping new countries to develop butterfly monitoring. Van Swaay et al. (2012) in Manual for Butterfly Monitoring.

UK and country-level indices are also used as biodiversity indicators. The indicators are split into wider countryside species and habitat specialists, and in England woodland and farmland butterflies are also assessed separately. 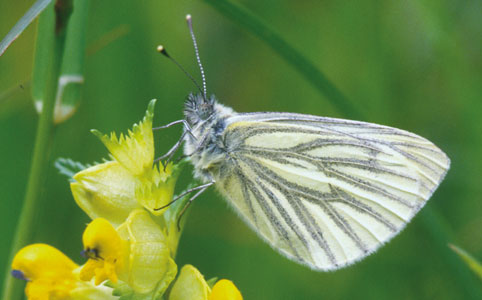 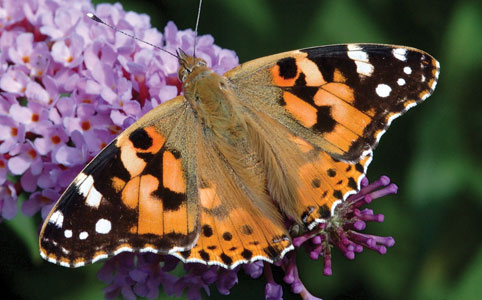 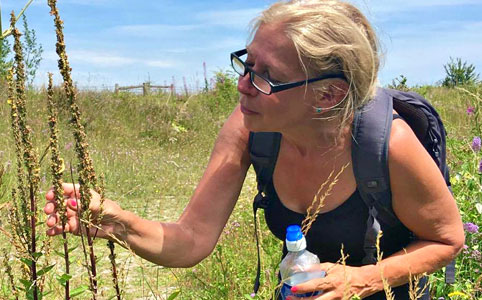 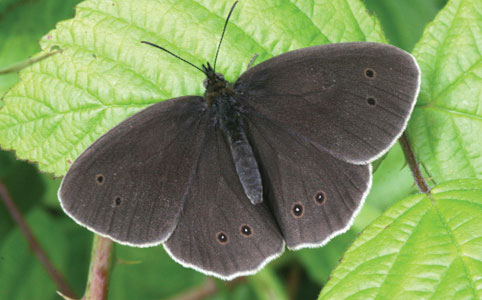